I’ve been asked on more than one occasion how I manage to balance all of the competing demands on my time. The smart alec answer is: I don’t sleep. Of course that is a bit of an embellishment, but honestly ever since I hit menopause, I consider myself lucky when I get five hours of sleep in a night (combined time because of course it is never in one big block of time).

On the weekends, I don’t check Facebook or my three different e-mail accounts in the middle of the night anymore because when my wife asks (blurry eyed), “What are you doing, stop checking Facebook,” I feel silly. Although, during the week, I am able to fire off several answers to private messages, click a few likes, and clear out all three e-mail inboxes in record time. When I wake in the middle of the night due to a particularly nasty hot flash, I’m wide awake and raring to go. The weekday obsession with Facebook is currently fair game….that is until my wife moves in with me after we sell our house.

And…..that’s my segue into Project House Sale, which has added to the dilemma of not enough hours in the day. Instead of a lovefest with my wife on the weekends, we are having an affair with our junk drawers. It’s not been satisfying for me at all. No blissful cigarette after…oh wait I haven’t smoked for years, so that doesn’t apply anymore! Cleaning out junk drawers is not as kinky as you might imagine, regardless of the items found in the drawers.

Our house finally listed TODAY and here are some of the pictures to prove that we mended our evil hoarding ways (or did we just move the junk to the condo and storage unit…well maybe we did that just a tiny amount). 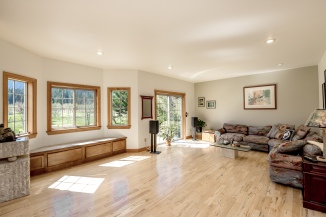 Preparing a house for sale requires hundreds (okay maybe a slight exaggeration) of little decisions along the way. One of those decisions was to hire two different companies to perform the deep cleaning and landscape beautification projects. The company hired to clean the house charged a small fortune. No really, I balked at first and said screw it, I’ll ruin my back to shampoo the carpets for what they’d planned to charge. In the end, I relented because I had to admit, I’m not Superwoman and my writing was suffering (among other things cause a gal’s gotta have priorities).

The company who did the cleaning and charged the same amount as the purchase of a small island (yes definitely an embellishment), had a few mishaps. First, they closed the shower door so hard, it shattered. Next, they left several purple spots on the rugs they’d cleaned in different rooms from whatever chemical they were using. Finally, there was a suspicious dark spot in the library that I’d bet my car was left by the machine hanging out in the same spot, or some weird tool they used. The company offered the explanation that it was probably a seam. Seams are not in the shape of a square in the middle of a room. What’s your vote – see picture below. 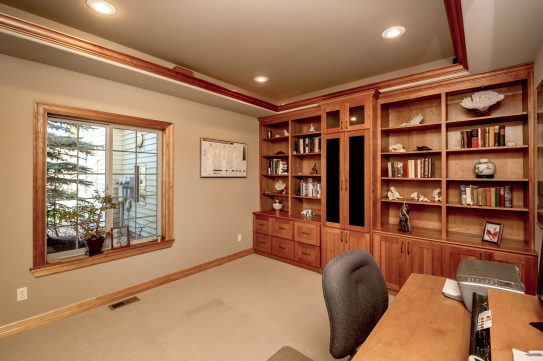 When my wife called to ask if we would consider splitting the cost of the new shower door…well let’s just say that my normally Zen view of the world went straight out that newly cleaned window. I believe my exact words were, “No f*&$ing way.” I may have repeated the f-word for emphasis in case my position on the matter wasn’t clear. My wife was quick to say, “Yes that’s what I thought too, but I wanted to check because sometimes you’re more conciliatory and willing to compromise.”  See shower missing said door.

My wife is right. Normally I seek a compromise position when conflict is on the horizon.

The next stage is the actual move and I am in charge of planning the estate sale for the remainder of the items too painful to give away, even though we’ve already done a fair amount of that in the de-clutter phase.

After Project Sell The House is done, I won’t know what to do with all the extra time. Maybe I’ll spend some more quality time with my wife or maybe I’ll write another book. I can only hope that menopause will stop being the mean little bitch she is and go away. The possibilities are endless.

If you haven’t read my books yet, hurry up because pretty soon there will be more out there with all this new time I’ll have!  The new anthology is almost due out, called It’s in Her Kiss and features two short stories with my character, Nicky, in my debut book, Love Forever, Live Forever.

7 thoughts on “The Balancing Act”