A Facebook post a couple of weeks ago, followed by an e-mail from GCLS sent me into a mild state of panic. What was the topic…the awards ceremony.

The first post asked other writers and readers what they were planning to wear to the ceremony and I hadn’t yet decided whether I would attend or not. The next e-mail then asked would I be attending or did I plan to send a proxy since Locked Inside made the short list for the cover and in the Contemporary Romance category.

For those of you who know me just a little from my Facebook posts or who follow my blog, I joke about everything. When I was at the LoneStar Lesfic Festival, I told the story of the red dress. Many of you may not have heard the story, so I feel compelled to repeat it.

The first year I met my wife, my long term girlfriend of eight years had just dumped me for her “soulmate” who she lasted less than 6 months with. I was licking my wounds, not eating much and had lost quite a bit of weight. Along comes this beautiful woman and we started dating. I invite her to the big hospital fundraiser, AKA mandatory fun, and I pull out my size four dress (Nordstroms has a habit of marking dresses a size below the actual size to make women feel better and sell more dresses). I slip the dress on and off we go to the Magical Evening (affectionately nicknamed, the Tragical Evening). All is well, the dress fits me like a glove. 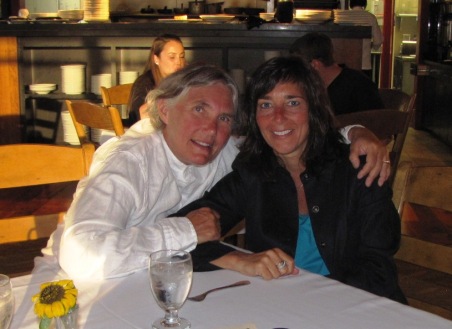 Fast forward to one year later and now I’m fat and happy with the love of my life. We do enjoy eating good food. I pulled out the red dress, stuffed myself into it, and stood in front of the mirror.

“Holy shit,” I exclaimed to no-one (my wife is still in the shower).

I looked like a bulging air mattress after you’ve opened it and are now trying to stuff it back in the same bag. It never works. My stomach and hips pushed against the fabric in a very unattractive way. I was THE definition of a muffin top in an expensive red dress.

I didn’t own a girdle, so I pulled out the next best thing…a pair of biking shorts. I took another look in the mirror after shimmying into the brilliant solution to my dilemma.

This time my wife sauntered into the bedroom and after hearing me mutter, asked, “What’s wrong, hon?”

It’s been over ten years so I don’t remember the exact conversation, but ultimately I made her help me select one her of outfits that I was able to fit into.

At the time I rationalized my expanding midline and said to myself, “I deserve to carry a few extra pounds because I’m over forty and that’s just what happens when women reach that fine age of maturity.”

I went along blissfully ignorant, buying new clothes, selecting new mandatory fun outfits, until our hospital started a wellness program. When I stepped on the scale and got the results of the body fat testing, I shrieked. In five years, I’d gained 25 pounds and was now a size twelve. Enough was enough. My OCD kicked in and three months later, I’d lost the 25 pounds, developed a new habit of working out every day for a minimum of ninety minutes, and voila the red dress fit again. Muffin top was gone.

At LoneStar, someone asked if I could still fit in the red dress. I proudly said yes, but now I’m second guessing that answer. It’s possible I’ve gained a few pounds back, maybe five, because I started my clandestine affair with sugar again. I promised I would wear the red dress at the GCLS awards ceremony because I didn’t think I’d make the short list. Now I feel compelled to honor that declaration or seek other alternatives.

I finally decided after much deliberation to take the plunge and took the survey that GCLS sent out indicating I would attend the ceremony. I bought my wife a ticket. Then I was asked to present an award…so I am committed to finding something appropriate to wear.

I have a little less than two months to shed those five pounds or I could break my promise and pull out the off the shoulder blue dress that hides the muffin a bit more. What do you think? See the pictures below and tell me which one should I wear? The voting is now open! There is a third alternative that has been suggested…buy a new red dress, but that would peck at my integrity.

Maybe my book sales will cover the cost for alternative number three….a girl can dream!

Just a reminder that the links to where to buy my books are below and a reader said I should mention that the two short stories I wrote in the anthology, It’s in Her Kiss, are follow-ups to the characters Nicky, Annie, and the gang in Love Forever, Live Forever, which was my debut book. Apparently they are very “amusing” and “cute” as was described by some readers. Don’t forget the anthology is for a good cause and if you want to know hear Nicky’s story after reading the two shorts, Vampire Pussy….Cat and Nicky’s Christmas Miracle X3, be sure to pick up Love Forever, Live Forever. Peace out!

8 thoughts on “The Red Dress…”