I decided to make up a new word. Why? Well…why not? I’m a crazy author, we do shit like that. I’ve written before on how my books tend to be mash-ups, which I’ve defined as a combination of romance with…take your pick: mystery, intrigue, action, sci-fi, fantasy, dystopian, paranormal. You name it and I’ve combined it with romance. With the exception of historical or pure humor. Even though I’ve been told my books are funny, at least some of them, I could never write a classic comedy.

So…what is a squeries? It is a mash-up of a sequel and a series.  Although I suppose the new book titled, The Organization, that I wrote with Erin O’Reilly is being marketed as the sequel to Asset Management, I wondered if it would be considered part of a series as well. Don’t get too excited, I have not decided to continue to write more books in the series. A Thanksgiving short may appear, but that’s it.

I did some research (of course I did) and looked up the definition of both. A sequel is defined as “a published, broadcast, or recorded work that continues the story or develops the theme of an earlier one.”  A series is defined as “a set of books, articles, etc., that involve the same group of characters or the same subject.” I thought both of these definitions could be applied to The Organization. The same characters from Asset Management show up and play a prominent role, but there are new characters and we’ve highlighted one very minor character in Asset Management. I couldn’t decide which definition was more accurate, so I made up a new word!

I still haven’t figured out what motivated me to bend to the reader pressure to write a squeries, but I have vowed this will be the last one. And yet, I often write short stories using the same characters in my previous books. Does that make those stories squeries?

Personally, as a reader, I have a love/hate relationship with series books or sequels.  I used to love them because when I came upon a series or an author I enjoyed reading, I was instantly provided with reading material for several weeks. Back in the 80’s, 90’s and until relatively recently (within maybe the last 5-7 years), there wasn’t as much to choose from. When I came upon a new series, I was in lesbian heaven. Now I almost hate them, because when I start the series and get invested in the characters, I feel compelled to complete the whole series. This is a bad thing when that new shiny book with all the great reviews comes out and I can’t get to it until after the 7 book series is done.  My reading rules have changed. Now…gasp…I don’t always buy the next book unless it is so outstanding I can’t help myself. 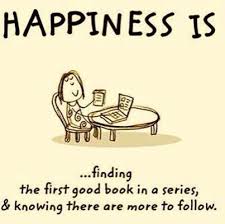 One of the first things my publisher said was that with each new book in a series, readership goes down. However, that’s not the rationale for my adamant opposal to writing them. I think I get bored too easily. I want to create new stories and new characters in new genres because I have a touch of ADHD. I also hate to weave in the background with a data dump (that coincidentally readers hate) so I can make the book a standalone, as well as part of the squeries.

As a compromise to revisiting those beloved characters, I’ve woven them into new books or subtly referenced previous books within a new book. I wonder what that might be called, maybe a serken…series and token mashed together. I like this definition of token… “a memento; souvenir; keepsake.” I like the idea of leaving tiny souvenir’s inside of my books or short stories. The first time I did this was with the short story that is part of an anthology, available for purchase to raise funds for the GCLS titled, Conference Call. Readers probably won’t realize I did that unless they purchase the book vaguely referenced that is coming out in February, called Unconventional Lovers. I did it again with my most recent manuscript, called The Book Addict, that is currently under review.

If you want to familiarize yourself with the characters in The Organization, feel free to pick up Asset Management or any other book I’ve written. You know the drill…click one of the links below. The support is always appreciated!