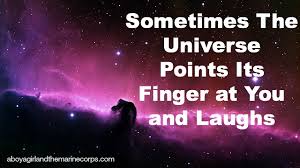 My wife always says that sending good vibes out to the universe is a powerful thing, so that’s what I’ve been doing ever since we made the decision to sell our house. Among the many reasons, one stands out…positioning ourselves so that my wife can retire and we can finally live together full-time. Another major factor was my desire to retire before the big affiliation between my hospital and the larger organization. I won’t go into all the complicated reasons why I want to do this, but I do have a logical train of thought on the matter. Well…all I can say is the universe has a warped sense of humor. Here’s what happened this week.

On Tuesday somebody contacted my wife to set up an interview for a job that would allow her to work from home and with her dream organization. At 9:00a the next day she had the interview. At noon that same day we had a showing on our house. The very next morning (bright and early) we got an offer for our house and ultimately accepted it later that day, but not without a great deal of angst from my wife who started second guessing our decision to sell. Here’s the thing…if she gets the job which it appears is highly likely, one of the main reasons to sell will fly right out that window of our beautiful house because she’ll be able to work from any location.

Of course I’ve been blogging about our house de-cluttering, cleaning. and moving adventures over the last three months so when she asked the horrifying question, “Should we pull the house from the market?” My response was so damn fast it broke the sound barrier. “No!” I replied.

We’d already spent a considerable amount of time and money to get the house ready to sell. Have I mentioned before that I really, really, really want to retire early? There was no way I was letting the Universe throw a monkey wrench in our plans.

I could live in a ten foot by ten foot box as long as I have my laptop. Hmmm…I’d do well in prison… My wife on the other hand will have a big adjustment. Bless her heart (not the southern idiom because that means something entirely different) that she was willing to agree to this major life change. She loves digging in the dirt and taking care of our three acres. Me…not so much.

I joke around all the time about how I pulled a flower when she sent me out to do a little weeding. She swears I did it on purpose so she’d never ask me to weed the beds again. I tease and say that is exactly what I did, but in all honesty I really did believe it was a weed. That is how clueless I am to all things gardeny (yes I know that is not a word). 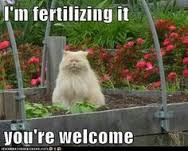 Tonight I want to celebrate and dance with joy about this new direction, but my wife is probably ready to shed more than a few tears. I’ll need to buck up and give my wife the loving support she needs to make this transition because I already heard her wobbly voice and I know she’s going to get teary tonight. Wine to the rescue. It is both an elixir for joy and a salve for sorrow…my idea of the perfect answer to our dilemma.

Yes the Universe is a cruel jokester…at least in my wife’s eyes. In mine, she is the answer to my daily mantra. However if my wife continues to work and I retire earlier than planned, I get to be her loving housewife versus the opposite which is what I’ve been joking about for years. I wonder if she wants me to wear a French Maid uniform….nah…definitely can’t pull it off at my age.

So now that I’ve got you sidetracked with those risqué thoughts, I’ve got to plug my new book which is by far the raciest one I’ve done up to this point. Check out The Ultimate Betrayal and it’s twin, Neptune’s Ring by Ali Spooner. They are both, hot…hot…hot.

Here’s a link to the book in case you need it!  Also don’t forget to check out Ali’s book! 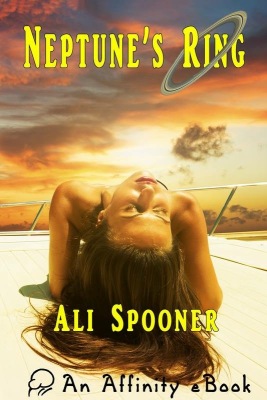