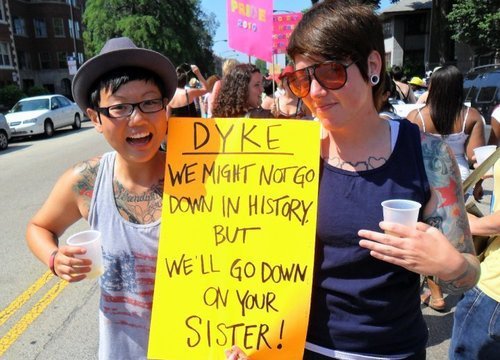 I am at that age where I get to claim whatever damn label I want for myself. That hasn’t always been the case for me. This past week, I was binge watching a series called, Dyke Central. That got me to thinking…what do others think about using the word dyke? So, of course, I posted on Facebook that very question. For the most part, with some caveats, the women who responded were not bothered by the word or being referred to as a dyke. Some did not necessarily identify with the term, others were quick to clarify that it depended on who was using the term and in what context or voice reflection.

I’m old enough to remember when the term was never considered acceptable, or so I thought. I went to high school in the 70s and I’d only ever heard the word used in a derogatory fashion. I also didn’t come out or realize I was a lesbian until well after college (in the early 80s).

The first time I heard dyke used in what I considered a positive fashion was during a pride parade. I was fascinated with the Dykes on Bikes. I wanted desperately to be considered a dyke even though the only motorcycles I’d ever owned were a Suzuki 50cc and Honda 250cc. Both were dirt bikes that could be used on the road, although neither should ever be ridden on the highway. The top speed on the Honda was 50 miles an hour. At the time I was introduced to the Dykes on Bikes, all I saw were tough lesbians who absolutely owned that name. If I called myself a dyke at that time, I was jeered at. I was told I couldn’t really use that label because it didn’t fit. I was crushed. So, I owned lesbian for a long time.

My fascination with motorcycles began at the age of 13. I had to win a game of chess with my father to earn the right to get that coveted 50cc bike. My mother was not happy. To this day, I don’t know if my father let me win or not. He swears he didn’t, but he’s a notorious liar. I never did graduate to something worthy of riding in a pride parade. Although I did get to be a different kind of dyke on a bike when my bicycle group got together and rode our bicycles in the Seattle pride parade. I’ve convinced myself that people were laughing with us. Not at us.

You know I always have to give a tiny bit of history and research on whatever topic I am talking about. The term Dykes on Bikes was first used in 1976 at the San Francisco Pride parade. At the time, they received a lot of criticism because dyke was seen as a derogatory term stemming from the slang diesel-dyke, bull-dyke, and bull dagger, which were the original derogatory terms for a lesbian, particularly those on perceived as more butch than femme. 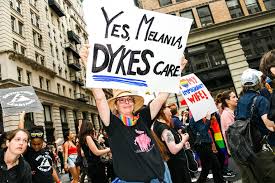 The origin of the word dyke is very interesting with various theories. In the mid-19th century to early 20th century, dike was American slang for a well-dressed man, who was “diked out” or “out on a dike”. These terms may have been a derivative of the Virginia term, “decked out”. As early as the 1920s, the word bulldyker first appeared in Harlem Renaissance novels. In this case, it was used in a derogatory fashion. The theory on where this term came from was the 19th century slang “dike” when referring to the vulva. Adding the bull, a term for a male cow, then became bulldyke, or a masculine cu__ (this is one word I will never own).

The very first time dyke was used in a positive fashion was in the 1970s in a poem titled, “Edward the Dike” published by Women’s Press Collective. Fortunately, this began the road to reclaim the word and empower the lesbian community. I am surprised by how far back this positive connotation goes. Honestly, I thought it was a more recent phenomenon. So…there’s your history on the word.

I am dyke. Hear me roar. Yup, I like thinking I can own that label and I do now. I looked back on the books I’ve written. I’ve used the word on occasion, both in a loving fashion and when demonstrating how others have and still do use it to hurl insults. I no longer let them. It might not be safe to do this, but if someone yells dyke at me, my response will be, “You bet your ass I am, thank you for noticing.”

Want to see how I’ve used the term in my books….you know the drill…click on the links below. I’ve used the word a lot more than I thought!

99 Cents Sale for Artist Free Zone! Still going in the UK now. For US folks, it is still on Kindle Unlimited and cheap at $4.99.